Shared Joy is Twice the Joy, Shared Pain is Half the Pain

Unsurprisingly, I didn’t make a new eggplant-based dish every day last week. But that’s mostly because the dishes I did make were good for multiple meals – dinner for two, lunch the next day, another lunch for two. But they were also delicious, so I guess eggplant week was successful in that I’m no longer scared of making dishes with eggplant.

I made two more eggplant dishes/meals, both stolen from some of my favorite food blogs:

First was a Cheesy Eggplant Bake from Home&Plate, which was basically eggplant lasagna but better. It was a bit too liquidy for my taste, so if (when?) I make it again, I’ll probably use a bit less tomato, or let it bake a bit longer. But it was truly tasty, cheesy as promised, and multiple friends I shared it with were fans. Unfortunately, both this dish and the next one got eaten before pictures happened…oops. But if that isn’t a testament to how delicious they were, nothing is.

The second dish was absolutely amazing, like basically everything from Smitten Kitchen: Baked Orzo with Eggplant. Again, filled with cheese and melted and beautiful in every possible way. Most significantly, I think, is that this recipe can (and will!) be adapted to literally any and every in-season vegetable.

In other news, the new Boston Public Market has just opened up (no, not Boston Market the restaurant!). This is a locally-sourced produce/food market with 30+ vendors open five days a week at Haymarket. While I don’t plan on making the trek down there during the summer for my produce, I almost certainly will be going down there in the winter to get some fresh, locally grown produce once the fall rolls around and the majority of farmers markets close their doors so to speak for the season.

I got back to Boston on Saturday, and hit Trader Joe’s Sunday morning with only one limitation: I biked, so I could only buy as much food as I could fit in my backpack. Usually, when I go shopping, I’m thinking about the leftovers I have in the fridge, or the half-opened box of pasta that needs to be finished – I typically adjust my purchases based on what I need to finish. But this time, it was just me, my backpack, and an entire store of possibilities.

We already know how much I love produce. I mean, farmers markets are basically my best friends, right? So being back in Boston, where I’ve got access to better produce than that which was available at the Stop’n’Shop in Upland, NY, where I can cull herbs from my baby herb garden on the porch, where I can go to a farmers market just down the street every Saturday… Let’s just say I’m happy to be home.

But back to TJ’s. They had graffiti eggplant for sale, which I’ve never seen before, but they looked cool, and since they’re smaller than regular eggplant, they seemed small enough to work for just one person. So I bought one.

But I figured I’d try it out. At a total investment of a whopping $0.79, it seemed like a reasonable risk to take.

In case it isn’t already painfully obvious, I’m now a fan of eggplant. And, in an attempt to experiment with my new favorite mid/late-summer ingredient, I’m dedicating this week to the eggplant. By which I mean I’ll be incorporating eggplant into every dinner I cook for myself this week, and hopefully I’ll end up with a few awesome ways to prepare and consume the strange purple vegetable. And then, since eggplant season is basically now until mid-October, hopefully I’ll have plenty of dishes to whip up as the school year (and my very last semester of undergrad) gets started.

Tonight’s dinner was Eggplant “Bruschetta,” taken off the smittenkitchen site (my favorite of all cooking blogs, incidentally) and was surprisingly simple and filling. It required slicing and baking the eggplant coated in a bit of olive oil, salt, and pepper. Then they were topped with diced tomatoes, onions, cheese, and some mint from my herb garden.

(Side note: the cheese was Trader Joe’s Farmhouse English Cheddar with Italian Truffles and was very possibly the best cheese I’ve ever had in my life. Just smooth enough without being too creamy; flavorful enough to go with salami yesterday for lunch but not so overwhelming that it drowned out the tomatoes tonight…basically heaven in block form.)

I’m pretty sure I’ve read this book before. For anyone who hasn’t read the book or seen the movie, it chronicles Julie Powell’s year long journey through Julia Child’s Mastering the Art of French Cooking, Volume 1.  The book isn’t some sort of literary genius, but as light-hearted fare with a bit of self-deprecation, some swearing, and many a recipe go, Julie & Julia ranks pretty darn high. There isn’t, honestly, much to say about it. Written much like a blog, the writing is casual, unstructured. I enjoyed it, and five years from now, I’ll probably end up picking it up in a moment of boredom and reading it again. It isn’t short (309 pages), but it isn’t long either.

If anything, Julie Powell’s experience – the cookbook, the blog, the book, the movie – makes me want to pick up a cookbook (let’s be honest, it would probably be the Smitten Kitchen cookbook sitting forlornly downstairs) and cook my way from front to back. Or, because you should always go with desert first, from back to front.

But the book itself doesn’t make me want to shout from the rooftops or anything. If you like cooking, this would be fun. If you’re looking for light fare that is unlikely to disappoint, this would be great. If you want a book with Meryl Streep on the cover, go to the nearest bookstore (or, at this point, library…) If you don’t fall into that category, I might suggest something from this list instead.

When you have homework to do, you magically find all sorts of other things to work on instead. And when you have a crazy wonderful Aunt who is constantly posting on facebook about her home-made pickles and marinara sauce and closet reorganizations, you have plenty of inspiration. And when you wanted just one ear of corn but the store only sold them in packages of five, you have the materials. So instead of doing your homework, you make Corn Chowder.

Step 1: sautee onions until they’re browned and sweet and fabulous. boil corn. cut kernels off the cob; add kernels to the sauteeing onions and add milk. mix them all together. 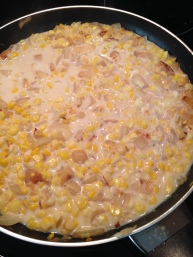 Step 2: pull out that blender. We had a surprisingly in-depth discussion as to whether the blender would be sufficient, as the recipe called for a proper food processor. I have to say, the final product was so perfectly textured that I can’t imagine making it any other way.

Step 3: blend. pour. consume. sprinkle some cayenne pepper for a bit of a bite.

Step 4: have a second bowl. because it’s just that good.

Step 5: save the rest for later. maybe when you get home late from tap and you’re too physically exhausted to make dinner. or save for finals, when you’re too mentally exhausted to cook. or, you know, for tomorrow because you can’t be bothered to wait that long and this chowder was amazing and you want more in your mouth. 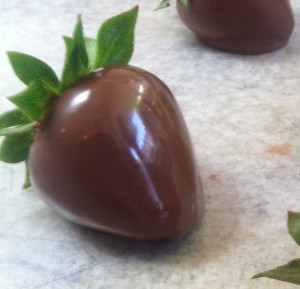 It starts with some beautiful strawberries, and a bowl full of melted Ghirardelli chocolate. Wash and dry the strawberries, grab the greens, dip, spin, cool, enjoy.  There really isn’t anything better.